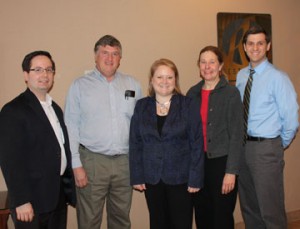 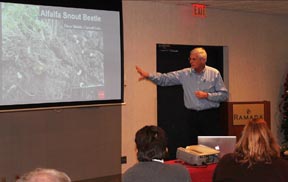 Fifty-five farmers have applied the nematodes and are seeing the restoration of their alfalfa crops in NNY; the goal now is to encourage other North Country farmers to make good use of the cost-effective application as well.

Brian Peck spoke about his personal experience growing up on his family farm where many years of research, funded by the NNYADP and New York Farm Viability Institute, helped produce a solution for the highly destructive crop pest, alfalfa snout beetle.

“When we watched alfalfa snout beetle kill our alfalfa, we thought it was doom and gloom, but this Northern New York research has produced a huge success for controlling snout beetle. It is good to hear the positive outcomes that show the money invested in the research is well-spent. We have to advocate for the research and activities that really do help keep New York State agriculture strong,” Peck said.

The ASB biocontrol protocol developed by Shields and his research team is now being applied in research trials in grapes, apples, hay, berry and greenhouse crops elsewhere in New York state. 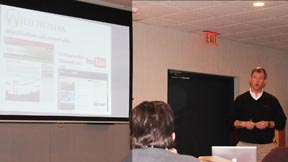 Cornell University researcher Larry Smart spoke about his research into developing willow as a bioenergy source that brings new use to otherwise unproductive and poorly-drained land. Trials of the clonally-propagated willow are found in NNY in Belleville, Potsdam, and Constableville; the NNY data is shared as part of a multi-state USDA project.

W. H. Miner Agricultural Institute Soil Scientist Eric Young spoke about tile drainage studies being conducted near Lake Champlain to measure the impact of tile drainage use on phosphorus loss compared to undrained fields. Young also mentioned research on the use of rye cover crops and the potential to combine that with the use of tile drainage to save farms money and enhance environmental stewardship all in one. 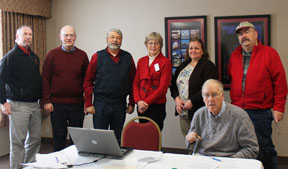 Dr. Chabot presented economic data that compared the use of new and aging droplines and spouts in seven Parker Family Maple sugarbush units in West Chazy. In one instance the data showed a gain of 9.7 gallons of sap which equated to a net profit per tap gain of $3.69.

The Dairy and Field Crops Sub-Committee session of the NNYADP meeting in Watertown included presentations by 1)Miner Institute Director of Research Catherine Ballard on a group housed calf feeding study, 2) Chris Pelzer (a graduate student working with Matthew Ryan in the Department of Crop and Soil Sciences) on the use of early interseeded crops to extend the value of corn and soybean fields on NNY farms, 3) Jerry Cherney about grass biomass potential and about tall fescue variety trials, 4) Dan Moebius-Clune about the latest results from testing the Adapt-N nitrogen management software, 5) Kimberley Morrill about a survey of dairy management practices, and 6) Jessica Scillieri-Smith, D.V.M. about her planned research on mastitis-causing pathogens. 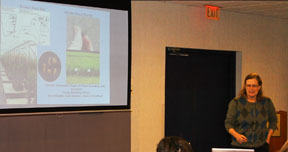 Dr. Julie L. Hansen spoke about the NNYADP-funded Cornell project that is breeding Alfalfa Snout Beetle-resistant varieties of alfalfa to work in tandem with the use of native nematode applications to reduce ASB pressure in NNY fields. Seven populations of plants have been selected since 2003 with steadily increasing resistance. A new trial planted in Lowville in 2013 will be harvested this year for evaluation.