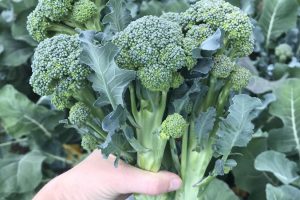 October 27, 2021; Lowville, NY – Register by October 25 for discounted admission
Extending the Growing Season in NNY High Tunnels
Join CCE vegetable specialist Judson Reid and Elisabeth Hodgdon for an afternoon focused on maximizing vegetable yields in high tunnels to get the most out of the growing season. Growing in high tunnels offers several benefits: Reduced disease pressure, warmer temperatures and greater environmental control, increase crop yield, and season extension. However, managing high tunnel crops differs in comparison to field crops in several ways. Careful attention to irrigation, soil fertility, ventilation, variety selection, and pruning methods are needed to grow quality crops. Jud will discuss common pitfalls seen on farm and how to avoid them so your tomatoes, cucumbers, and other warm season crops continue to produce quality crops throughout the summer and into the fall. Elisabeth will present the NNYADP-funded variety trial research on early spring high tunnel salad cabbages and sprouting broccoli. These brassica crops present an exciting opportunity to increase May and June retail market offerings.

Northern New York; September 15, 2021.  The Northern New York Agricultural Development Program (NNYADP) has issued a call for proposals for small grants funding for projects to be conducted in 2022. The farmer-driven research and technical assistance program benefits the diverse agricultural production sectors in the six-county region that includes Clinton, Essex, Franklin, Jefferson, Lewis, and St. Lawrence counties. The NNYADP grant guidelines and application are posted at https://www.nnyagdev.org under the About: Projects by Year dropdown tabs. Applications must be submitted on or before October 29, 2021. Anyone with special needs for submitting a proposal may contact Michele Ledoux for assistance at 315-376-5270.

“The farmers who guide the Northern New York Agricultural Development Program have a discerning ability to identify research that will have significant impact that manifests immediately in the short term, progressively over time as with our water quality and tile drainage research, or appreciably as with the development of the biocontrol nematodes pest management protocol that began here with a commitment to creating new science,” said NNYADP Co-Chair Jon Greenwood, Canton, New York.

The farmer-driven NNYADP is noted for its fiscal efficiency with 97 percent or more of its funding is applied directly to research and the transfer of project results to the agricultural industry. NNYADP project reports are posted online at https://www.nnyagdev.org.

Canton, New York; August 31, 2021.  The farmer-driven Northern New York Agricultural Development Program (NNYADP) is funding research that is evaluating how pre-calving feed management impacts post-calving cow health. The project is making one of the first applications of the Metabolic Health Index adapted by the Overton laboratory at Cornell University to identify cows that may be at higher risk of post-calving health issues, such as ketosis, hypocalcaemia, or poorer adaptation to lactation.

Cornell Cooperative Extension Regional Dairy Specialist Casey Havekes, in collaboration with Cornell PRO-DAIRY Director Thomas Overton, Ph.D., is working with dairy herds in northern New York to develop a data-based understanding of the feeding management factors that influence cow health during the transition period from 2 weeks prior to calving to 3 weeks post-calving.

“The transition period from pre-calving to post-calving is a critical time for maintaining cow health for successful calving and for maintaining a strong future for that cow in the dairy herd. With this project, we are looking to identify the nutritional and management characteristics in the pre-calving cow diet that influence post-calving cow health,” explained Havekes.

“Prior to the Northern New York Agricultural Development Program funding of this project, there has been little to no research done at scale on the impact of feeding management in the dry cow diet on cow health through the transition period,” said Overton.

Nutrient content, moisture level, and forage particle size of the cows’ ration pre-calving, the cows’ eating behavior through the transition period; and blood metabolite indicators are among the factors under evaluation by the researchers.

Cornell University research has estimated the cost of treating hypocalcaemia and ketosis to be respectively $335 and $117 for each case per cow.

The results of this 2021 research project will be posted on the NNYADP website at https://www.nnyagdev.org.

Northern NY; August 25, 2021.  The biocontrol nematode science developed  in northern New York to manage alfalfa snout beetle is now being tested for the reduction of other agricultural pests in the Midwestern U.S.

The success of this research has fostered trials now underway in multiple states.

“We faced huge losses to alfalfa snout beetle, the farmers who direct the Northern New York Agricultural Development Program made a commitment to however long it would take to develop the real-world science needed to find a solution. Today, the success of the research made possible by that steadfast commitment is paying off not only for alfalfa growers and dairy farmers in northern New York, but for the growers of multiple crops in multiple states and Canada,” said NNYADP Co-Chair Jon Greenwood, Madrid, New York.

In May 2021, Shields delivered a concentrated slurry containing the biocontrol nematodes to two 140-acre center pivot locations in western Nebraska. The slurry was diluted prior to application. Shields notes, ” The application in Nebraska was made about the time of the corn rootworm hatch there. In early July, the farmer reported only minimal root damage to his corn and almost no corn rootworm larvae. This is excellent news as corn rootworm as been overrunning whatever-traited corn he has planted.”

An independent public company has awarded funding for four years of biocontrol nematode trials for reducing corn rootworm in Iowa, Illinois, and Nebraska. The company is also funding internal trials in southwest and central Wisconsin and in Minnesota.

Additional trials are ongoing at several farms in Ontario, Canada. In Alabama, an Auburn University entomologist is evaluating the protocol for managing billbugs that damage lawn, sod, and grass crops.

In August 2021 in northern New York, agricultural entrepreneur Mary DeBeer will make a trial application of the biocontrol nematodes on a potato field bothered by wireworms. DeBeer established a biocontrol nematode-rearing laboratory on her family farm in Moira, New York, in 2016. Shields has advised DeBeer on the combined strains of nematodes and the rate of application to apply to the potato field.

The history of the science and success of Shields’ biocontrol nematode research in field crops and berry crops is posted on the NNYADP website at https://www.nnyagdev.org. Cornell Cooperative Extension trials in northern New York further proved that the biocontrol nematodes could survive application in a manure solution so farmers can accomplish crop fertilization and pest protection as one task.

August 16, 2021: Thank you to Spudman magazine for running this news item!
https://spudman.com/news/new-york-grower-test-biocontrol-nematodes-wireworms/

Moira, New York; August 10, 2021.  Can a nature-based pest management protocol that has helped protect alfalfa, corn, berry crops, and some organically grown root crops do the same for an organic potato crop? This month, a potato grower in Franklin County and biocontrol nematode laboratory owner Mary DeBeer of DeBeer Seed and Spraying in Moira, New York, will make a trial application of biocontrol nematodes to reduce the population of wireworms that damage the roots, sprouts, and tubers of potato crops. This trial joins others nationwide applying the biocontrol nematodes protocol developed with the long-term support of the farmer-driven Northern New York Agricultural Development Program.

Cornell University Entomologist Elson Shields, Ph.D., who pioneered the science behind the use of a combination of native biocontrol nematodes to reduce crop pest populations, has advised DeBeer on the strains of nematodes and the rate of application to apply to the potato fields.

“Our biocontrol nematode applications on multiple organic farms in New York and Canada have resulted in reduced wireworm damage to root crops and reduced soil populations of wireworms. With this application in northern New York, we would expect some protection in year one with full activity of the biocontrol nematodes in the potato field in year two,” said Shields.

“When we faced huge losses to alfalfa snout beetle, the farmers who direct the Northern New York Agricultural Development Program made a commitment to however long it would take to develop the real-world science needed to find a solution. Today, the success of the research made possible by that steadfast commitment is paying off not only for alfalfa growers and dairy farmers in northern New York, but for the growers of multiple crops in multiple states and Canada,” said NNYADP Co-Chair Jon Greenwood, Madrid, New York.

The NNYADP biocontrol nematode protocol is being applied to various crops in multiple U.S. states, from Texas to Minnesota. The trials have most recently expanded to cornfields in central and northern Midwest states. The research, which has also identified alternative methods of biocontrol nematodes application such as in manure applications and by center pivot irrigation system, has prompted parallel research trials in Ontario, Canada.

As part of her family’s agricultural services business, DeBeer established a biocontrol nematode rearing laboratory in 2016 after attending workshops with Shields and Testa.

“Northern New York’s farmers have been willing to invest in biocontrol nematode applications to protect their field crops. I hope this trial will expand that success to potato crops,” DeBeer said.