The Northern New York Agricultural Development Program held its 2015 annual meetings in Watertown in January and at Miner Institute in Chazy in February. The following notes and photos offer a quick summary of the project success stories and updates provided to farmers, legislators, and media at those meetings.

Each meeting included the opportunity for farmers to gather by commodity groups: dairy and field crops, livestock, horticulture, and maple to review past projects and identify areas of need and opportunity for future small grants funding. 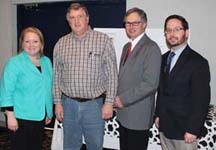 Dr. Elson Shields spoke at the NNYADP meetings about the potential for using biocontrol nematodes in other agricultural crops. The NNYADP-funded evaluation of the protocol with success for controlling two types of weevils in the commercial strawberry crop at Rulfs Orchards in Peru, NY. Owner Bob Rulfs estimates the weevils were causing up to $30,000 worth of crop loss. The New York Farm Viability Institute is now extending the value of the ‘20-year overnight success’ of the NNYADP alfalfa snout beetle control protocol for use in New York-grown grapes and organic apple crops.

NNYADP Co-Chair Jon Greenwood noted, “The alfalfa snout beetle is a fine example of the real-world results produced by Northern New York Agricultural Development Program projects, and it is exciting to see a project that began with solving a unique NNY problem has produced a solution that may help other crops across New York State.”

An update on the development of the first Amelanchier nursery in New York state at the Willsboro Research Farm in Northern New York was provided to farmers at the Watertown session of the NNYADP meetings by Cornell University agronomist Michael Davis manages NNYADP projects at the Willsboro Research Farm in Willsboro, NY, and at Miner Institute in Chazy, NY; and at the Chazy session by project leader Dr. Michael Burgess, seen below, of SUNY Plattsburgh. Above, Davis is interviewed by Time Warner Cable News. 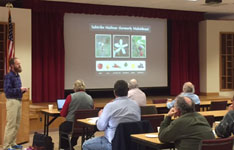 The nursery is essentially a living collection of amelanchier plants that will serve as the foundational material for identifying the varieties most well-adapted for regional growing conditions in the Northeastern US. The nursery will be one of the largest of its kind for this ‘super fruit’ commonly known as Juneberry in the U.S. Juneberry has a high antioxidant nutritional profile and represents an emerging ‘super fruit’ with high economic opportunity for Northern New York and Northeast growers and valued-added processors.

“New diseases arise and formerly minor diseases become more damaging on a regular basis in stressful environments due to soil and climate conditions and other factors,” Cornell Plant Pathologist Gary C. Bergstrom told visitors to the NNYADP meeting in Watertown. Bergstrom leads the NNYADP-funded NNY Corn and Soybean Disease Diagnosis and Assessment Database building project that is assessing and mapping diseases in corn and soybean crops across the NNY region. NNY Field Crops and Soils Specialist Dr. Kitty O’Neil made this presentation on behalf of Dr. Bergstrom at the Chazy meeting.

Common, emerging and re-emerging crop diseases are a threat to the two economically-important crops in Northern New York, estimated to have a more than $106 million combined economic impact in NNY.

Dr. Michael L. Thonney of the Cornell Sheep and Goat Program presented the results of NNYADP-funded research evaluating parasite control strategies for controlling barber pole worm, a major cause of death in sheep and goats. Thonney and Cornell colleague tatiana (spelled with a lower case t) Stanton and Dr. Dwight Bowman and Janice Liotta of the Cornell School of Medicine Department of Microbiology and Immunology worked with North Country livestock producers and NNY Livestock Specialist Betsy Hodge with CCE St. Lawrence County to test the use of copper oxide wire particles, or COWP, as a deworming method for sheep and goats. Cornell Professor of Animal Science tatiana Stantion shared this information at the Chazy meeting. 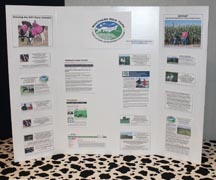 One of several NNYADP educational displays at the meetings included this comment from sheep producer Beth Downing of Downing Acres in Burke, NY: “Sheep farming is our livelihood and parasites can take a heavy toll on breeding ewes and on weight gain in lambs. We use a combination of strategies to keep our sheep healthy and control parasites, including rotational grazing, deworming, keeping good records, and participating in Northern New York Agricultural Development Program research to learn new ways.”

Cornell University Animal Science Professor Debbie Cherney, an animal nutrition specialist, presented the value of pre- and post-harvest evaluation of alfalfa-grass crops for producing higher quality forage. She noted that tall fescue for example is replacing timothy in crops across the U.S. due to the higher yield potential and crude protein percentage in the tall fescue. She spoke about opportunities for improving the timing of harvest to gain optimal crop quality, particularly for feeding to dairy cattle.

Dr. Jessica Scillieri-Smith, a veterinarian with the Quality Milk Production Services lab in Canton, NY, presented preliminary data on research into the pathogens that cause mastitis in dairy herds. The research focused on the group of contagions known as ‘other streptococcal species.’ Early data shows an emerging challenge from among 16 different organisms identified in milk samples from 143 participating farms. The project will continue in 2015.

The protocol for using NY native nematodes as a biocontrol for the pest that can destroy entire fields of alfalfa in one season was developed by Cornell University entomologist Elson Shields with long-term funding from the NNYADP. Nearly 10,000 acres of alfalfa have been treated on NNY farms and Shields is encouraging other farms to try the easy-to-implement strategy to protect their crops. The nematodes can be raised on-farm for field application or purchased from the Shields Lab at Cornell.

The Chazy session of the NNYADP annual meetings was held at Miner Institute, at left. The agenda there included Dr. Margaret E. Smith providing data on the 2014 corn grain variety trials. This annual information helps farmers select the hybrids that indicate the opportunity for the best quality and yield under Northern New York growing conditions over multiple years. Dr. Smith was recognized as the outgoing NNYADP grants coordinator; Michele Ledoux, Executive Director of CCE Lewis County, was welcomed as the incoming coordinator at each meeting.

This website provides more information on all the projects mentioned. To learn more, click on the menu headers for your field of interest.