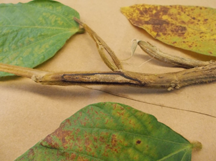 Canker on stem, and inter-veinal discoloration of leaves above the canker caused by northern stem canker. Photo: Jaime Cummings/Cornell University.

The disease was diagnosed at Cornell based on characteristic symptoms and the laboratory isolation of the causal fungus and confirmation of a portion of its DNA sequence.

Soybeans are also being scouted in other areas of New York in 2014, but so far this disease has not been detected outside of the seven counties mentioned above.

Northern stem canker (NSC) is caused by the fungus Diaporthe phaseolorum var. caulivora and differs from a related fungus, Diaporthe phaseolorum var. meridionalis, that causes southern stem canker throughout the southern U.S. NSC occurs in most Midwestern states and in Ontario, but this is, to our knowledge, the first confirmation in New York or the northeastern U.S. Reported yield losses in the Midwest have ranged from minor to in excess of 50%, so the presence of the pathogen is considered a significant factor for soybean production.