The Northern New York Agricultural Development Program is inviting North Country farmers to hear the results of its latest projects at its annual meetings in eastern NNY on February 27 in Chazy. The research reports sessions begin at 1pm at Miner Institute in Chazy. Registration is not required to attend.

The Northern New York Agricultural Development Program is a farmer-driven research and technical assistance program serving all sectors of the agricultural industry, from dairy and crops to livestock, maple and horticultural production, in Clinton, Essex, Franklin, Jefferson, Lewis and St. Lawrence counties.

One of the acclaimed Northern New York Agricultural Development Program successes came through long-term funding that provided the time needed for Cornell University researchers to develop an inexpensive, biocontrol treatment that is now substantially reducing the impact of the highly-destructive alfalfa snout beetle. The concept of using native nematodes that destroy the larvae of the beetle is now being applied in trials to reduce other types of pests in strawberry crops in Northern New York, in apple and grape crops elsewhere in the state, and at the Battle Island Golf Course in Fulton, NY. 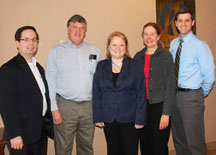