One NNYADP project showed promise of protecting strawberry crops with the application of the successful biocontrol treatment developed by Cornell entomologist Elson Shields, at left, with NNYADP funding to manage a highly-destructive alfalfa pest. The participating berry grower was suffering up to $30,000/year in economic loss to two types of weevils.

Shields’ protocol for using native NY nematodes to reduce alfalfa snout beetle that can destroy entire crops in one growing season was applied to nearly 10,000 acres of alfalfa in 2014, extending its value to dairy, livestock and cash crop farmers.

In a separate NNYADP project, Cornell researchers are gaining ground in selectively breeding alfalfa snout beetle-resistant alfalfa varieties. Alfalfa is valued by the dairy industry at $135/ton for milk production.

Corn and soybean growers in Northern New York and elsewhere in the state are welcoming the results of the NNYADP Corn & Soybean Disease Diagnosis and Assessment. Results are alerting farmers to react quickly newly-emerging and perennial crop problems. The regional corn and soybean industry is valued at $106.91 million.

NNYADP-funded research conducted by the Quality Milk Production Services Lab in Canton has begun identifying mastitis-causing contagions that appear to be becoming a new challenge to the $486.9 million dairy industry of NNY.

A 44 cents per cow per day gain in income over feed costs was the estimated benefit of the NNYADP project evaluating regional options for cost-effective, lower-starch feed options to replace corn in the dairy cow diet. This project was conducted by W.H. Miner Agricultural Research Institute in Chazy.

Dairy and field crops projects in 2014 produced insights on how dairy operators can boost forage quality, feed digestibility, fiber balance, and the resulting milk per acre gain in production when that forage is fed to dairy cows. For example, participating farms saw more than a 110 percent gain in crop yield on eight fields in the research trials evaluating field-by-field nutrient use. The return in efficiently grown corn crops is expected to return as much as $4.15 per bushel in 2015.

The NNYADP economic report notes that one Northern NY dairy farmer who worked with crop advisor to implement the Adapt-N software that identified the level of nitrogen needed to grow corn estimates he saved $20,000 in fertilizer that was not needed.

The small livestock farmers who help drive the NNYADP asked for assistance in controlling a parasite that is a cause of high mortality in sheep and goats. On-farm NNYADP research conducted in 2014 is identifying strategies that work and treatments that are not effective for the NNY small livestock industry valued in excess of $679,000.

One of the NNYADP fruit and vegetable projects in 2014 evaluated opportunities for high tunnel growers to extend their revenue opportunities with high value crops, including $8/lb basil, $16/lb ginger, and $3.50/lb. beans.

Vegetable growers are benefiting from NNYADP research and outreach on how to cope with leaf mold that impacts greenhouse and high tunnel production of tomatoes as a high value retail crop valued at an average of nearly $3500/acre according to the NNYADP economic impact report. 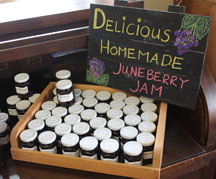 NNYADP funds established the first Juneberry genetics nursery in New York State in Willsboro as the go-to research center for the ‘superfruit’ high in both nutritional value and consumer interest. The NNYADP report cites a pint of Juneberries retails for 20 percent more than a pint of blueberries

The NNYADP economic reports and project results are posted online at www.nnyagdev.org. Click on the boxes to the right on the home page for Economic Reports and Success Stories. Click on individual headings at the top of the page to find research reports in your interest area: Dairy, Crops, Livestock, Local Foods/Horticulture, Maple, and Bio-Energy.