The Northern New York Agricultural Development Program (NNYADP) has funded valuable research in support of Northern New York’s maple industry. In 2008 Michael Farrell, then-director of the Uihlein Sugar Maple Research Forest at Lake Placid, N.Y. and a recipient of several NNYADP funding, projected that the maple industry of the NNY had a $10 million annual potential. In a conversation earlier this year, Farrell noted that that mark has been reached and surpassed.

In a maple-theme Extension Out Loud podcast episode recorded at Cornell University, NNYADP Coordinator Michele Ledoux does a fabulous job of discussing the maple industry not only in Northern New York but statewide. She highlights the latest production techniques, and, just after a break about 17 minutes into the 27-minute program, she mentions the work of the Northern New York Agricultural Development Program.

Get out this weekend to enjoy maple tastings and tours at NNY sugarhouses on the second NYS Maple Weekend. Most sites are open 10 am to 4 pm on Saturday, March 30 and Sunday, March 31. Check listings at mapleweekend.com for sites and directions. 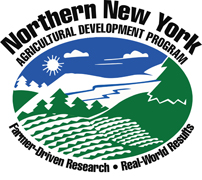 To read more about NNYADP maple projects, including the innovations in maple sap collection and the cloning of NNY sweet trees, click here.