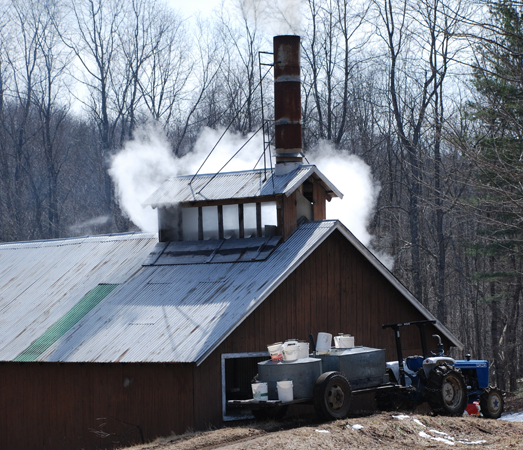 “Maple, and now birch, syrup producers are on the front lines of dealing with the effects of climate change and the variations that have increased the unpredictability of when sap will flow,” says Dr. Joseph Orefice, director of the Natural Resources and Forest Program at Yale University. Orefice managed the tapping trials in Northern New York while director of the Uihlein Maple Research Forest in Lake Placid, N.Y.

The project has established baseline data for continuing efforts to determine the optimal time to begin tapping birch trees in conjunction with maple production.

“Birch syrup is a relatively new agricultural product being produced in Northern New York as a way for maple producers to diversify their revenue streams and optimize capital investments in forestland and syrup-producing equipment,” says Orefice.

The report posted under the Maple tab at www.nnyagdev.org compares sap and syrup yields based on various tapping times of maple and birch trees at the Uilhein Maple Research Forest in Lake Placid, N.Y., and at the Paul’s Smith College Forest in Paul Smiths, N.Y.

The trials conducted in January through May of 2018 including the tapping of paper and yellow birch trees immediately after finishing the tapping of maple trees, during mid-maple season, and post-maple production season.

Sap collection was impacted by taphole closure, particularly with the maple trees that were tapped early in January, and with birch trees likely due to bacterial buildup in the taphole before birch sap begins to flow.

“While much more research is needed to determine ideal weather conditions to predict the start of birch sap flow, we suggest that birch syrup producers wait until around the end of maple season to tap their birch trees. This will assure that they do not have early taphole closure of birch and will also reduce complications in the saphouse related to collecting the two different types of sap,” Orefice concludes.

For maple producers, the report notes that early pre-season tapping of maple trees is competitive with tapping in mid-February.

“Waiting to tap until late February and early March risks missing early-season sap flow events and having less total season production,” Orefice summarizes. “Low sugar contents during January sap flow events were likely a result of sugar not yet being converted from starches within the tree and also not being released into the maple sap.”

For more information, see the complete Comparison of Sap Yields Per Timing of Tapping Schedules for Maple and Birch Syrup Production report on the Northern New York Agricultural Development Program website at www.nnyagdev.org.